I Wuf You Pirate Card by Ellen Haxelmans 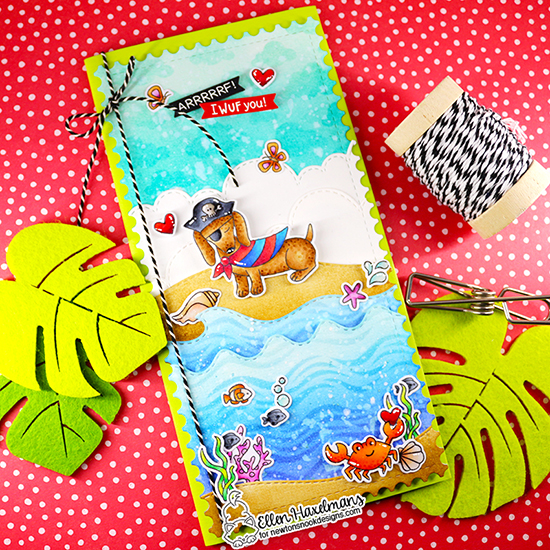 Pirate Puppy by the Sea!

Today Ellen has created a fun nautical scene featuring the dog wearing a  pirate costume from our Dress Up Doxies Stamp Set! She colored the dog with copics, adding cute little speckled details and cut him out using the coordinating Dress Up Doxies Die Set. Then she used a bunch of other NND stamps and dies to created the fun tall scene! For the layers of sky, sand and sea, she used our Sky Borders Die Set, Land Borders Die Set and our Sea Borders Die Set to create layers of clouds, waves and sand! 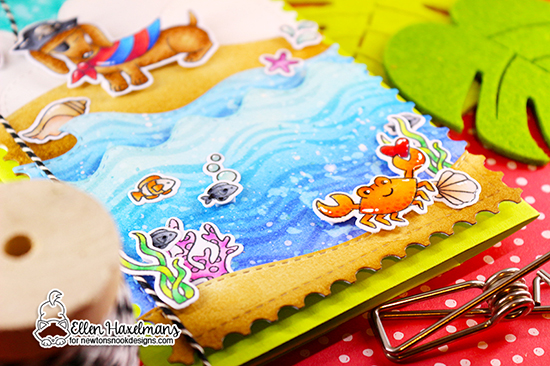 She added stenciled waves onto the die cut waves using our Waves Stencil. That cute crab on the bottom is from our Tides of Love Stamp Set. She added in more little fish, seaweed and shells using the little images from our Narly Mermaids Stamp Set, Purr-Maid Newton Stamp Set, Scuba Newton Stamp Set and Manatee-rific Stamp Set. She colored all these tiny little sea themed images and cut them out with their coordinating die sets. 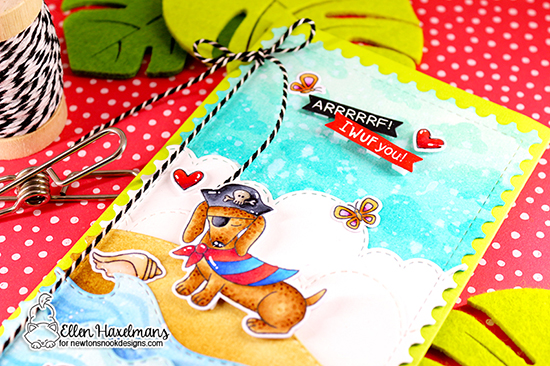 For the sentiment on the top, she combined the "Arrrrf" from the  Dress Up Doxies Stamp Set with the "I wuf you" from the Puppy Playtime Stamp Set.

Ellen is a genius at creating scenes! See her tips below on how she created this one!

Tips on creating this scene!

Below we have some tips from Ellen on how she created a fun tall scene! 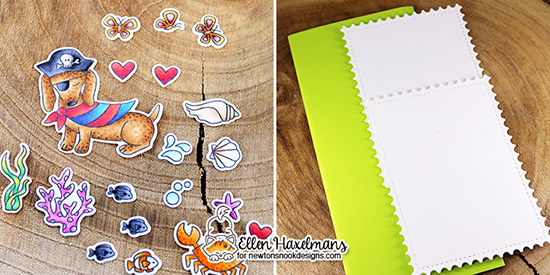 There are so many fun ways to combine our products for creative scenes! We love hearing the process on how Ellen created this! If you love this project by Ellen you can visit her over at her blog Crafty Ellen to see more of her beautiful creations! 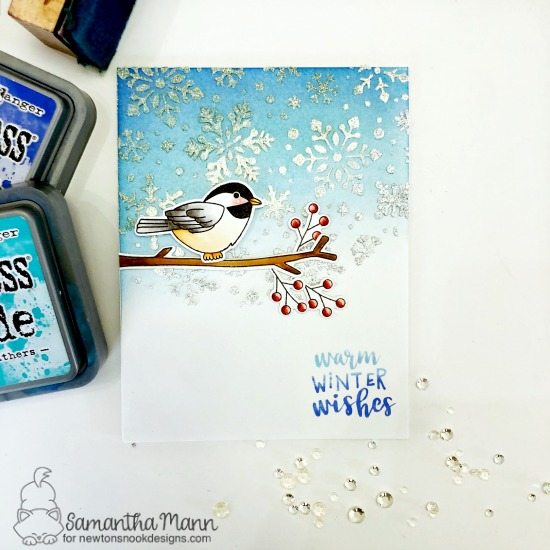 Is it cold where you live this week? This cozy card by Samantha is perfect for sending warm winter wishes on a cold day! She created this amazing winter scene, featuring the chickadee from our Winter Birds Stamp Set. She did some gorgeous coloring on that lovely winter bird and added in a branch and some berries too. The images were all cut out using the coordinating Winter Birds Die Set and added over a beautiful snowy background. To create the glittery snow in the background she used our Snowfall Stencil to add some glittery silver snow over the blue inked background. This adds the perfect touch of sparkle to her card! She finished the card off with the sentiment "warm winter wishes," also from the Winter Birds Stamp Set, stamped in the corner.


We hope this project by Sam makes the cold winter day warmer! To say hello to her and see more of her awesome creations you can visit Sam over on her blog, Sam's Scrap Candy!

You Octopi My Heart Card by Amanda Wilcox 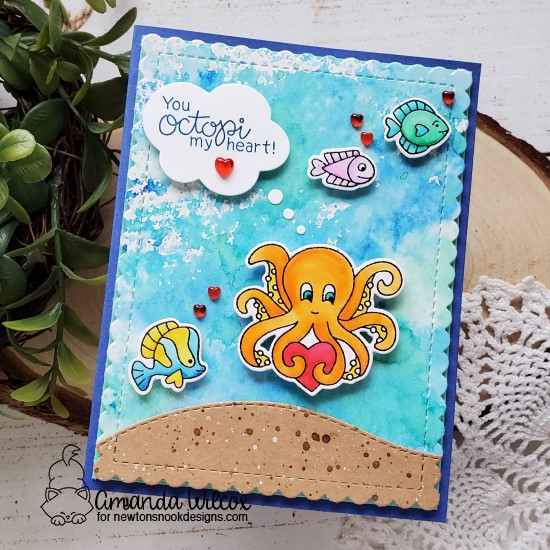 You Octopi my Heart!

Today we are sharing an adorable card by Amanda that will "Octopi" your heart! She created this amazing underwater scene using our new Tides of Love Stamp Set. She features the octopus and three little fish from the set, embossing them onto Bristol paper and coloring them with fun bright watercolors. Isn't the octopus so cute in orange? To cut the images out she used our coordinating Tides of Love Die Set and layered them over a fun watery background.

To create the water background she scribbled Tombow markers unto a clear stamp block and then spritzed it with water before squishing it onto the watercolor paper! What a fun technique! She cut the background panel out with a scalloped edge using Frames & Flags Die Set. She also cut out hill of sand using our Land Borders Die Set, splattering it with distress ink and paint to add that fun sand texture!

For finishing touches, she added the sentiment "you octopi my heart" onto a thought bubble that was cut out using our Speech Bubbles Die Set. She also added cute little heart shaped gems to add to the love!

Here are a couple of close-ups so you can see all the gorgeous details: 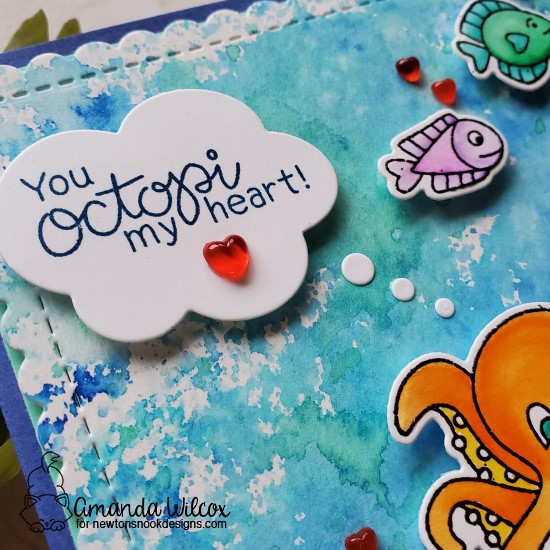 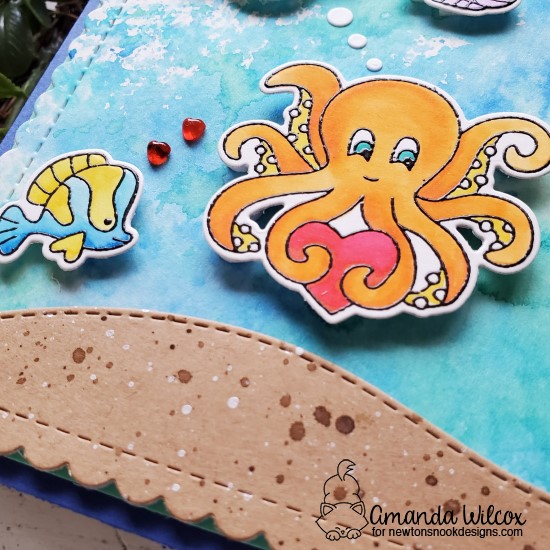 We hope this project by Amanda made you smile today and give you some ideas on how to create underwater scenes of your own! To say hello to her and see more of her awesome creations you can visit Amanda over on her blog, Twiddler's Nook!

I Wuf You! Puppy Card by Maria Russell 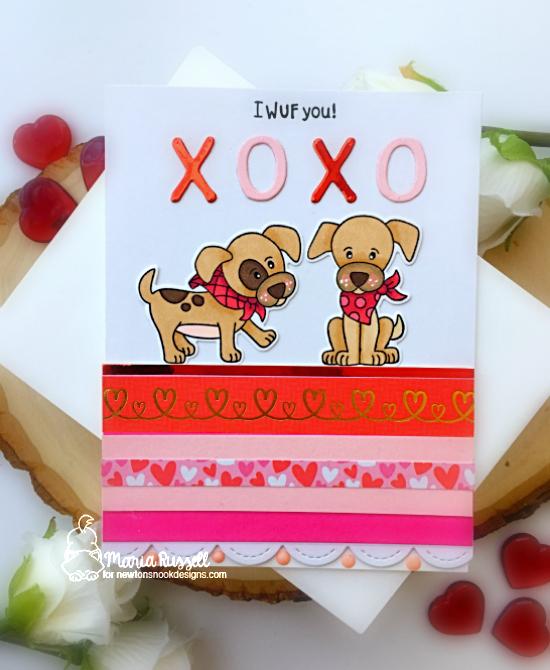 Today we are sharing an adorable puppy card by Maria that is filled with love! She created this card by stamping two of the cute pups from our Puppy Playtime Stamp Set. She colored them in shades of brown and added cute little pink cheeks and white freckles too! The scarves on the pups were colored with fun pops of red and pink! Then she added them to her card, cutting them out with the coordinating Puppy Playtime Die Set. To create the XOXO sentiment, she cut out letters using our Essential Alphabet Die Set with pink and red. The "I wuf you" sentiment is also from the Puppy Playtime Stamp Set. She finished the card off by adding thin stripes of patterned paper across the bottom half that matched the pink and red layout!

This card would be perfect for a Valentine just to send someone some love any time of year!

Here is a close up so you can see all the details: 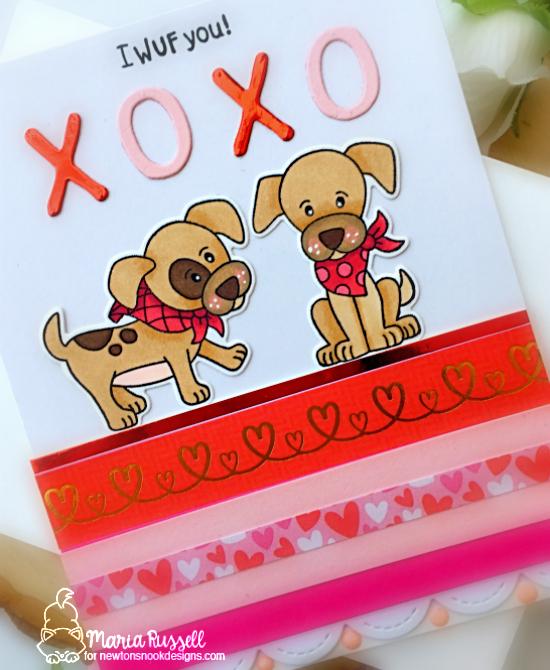 To see more beautiful projects by Maria you can visit her over at her blog, Maria Russell Designs and don't forget to subscribe to her YouTube channel too! 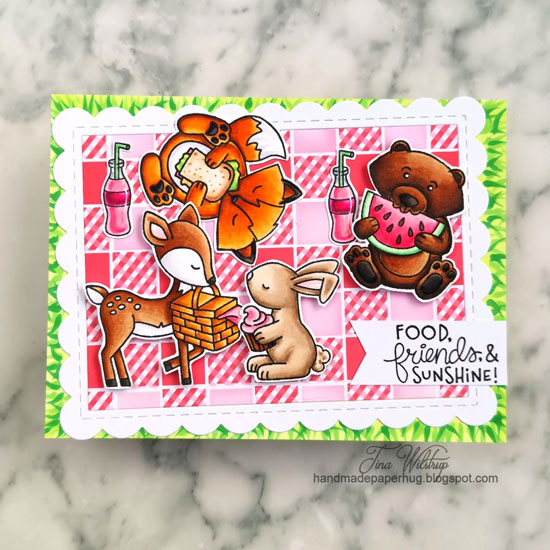 Hello everyone! I don't know about you, but I'm so ready for spring! For my last post as guest designer I used the adorable Woodland Picnic Stamp Set. 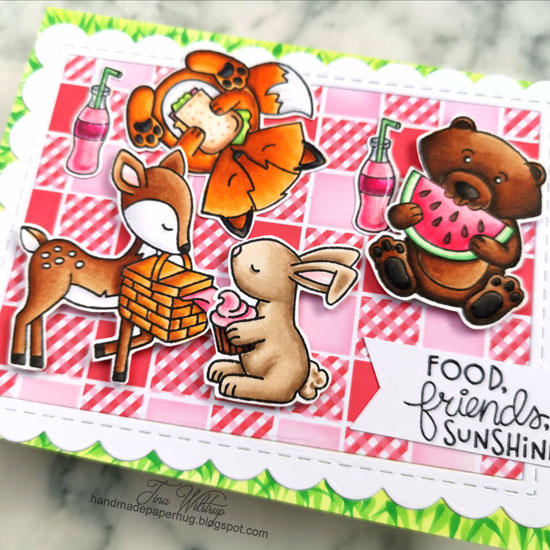 I stamped all the critters as well as a couple of sodas, colored them with Copics and fussy cut the images. 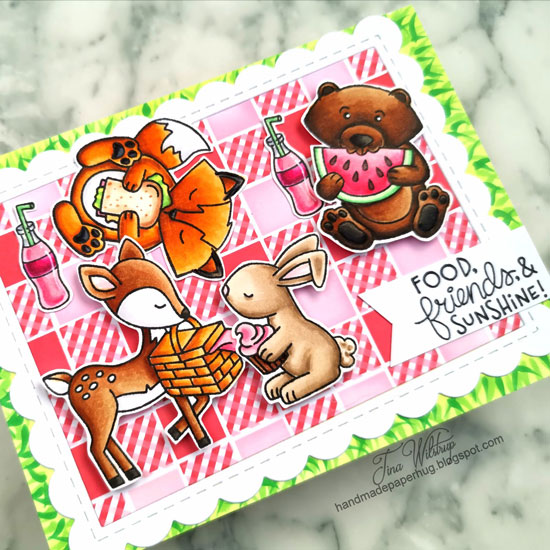 I wanted to have them sit on a picnic blanket so I first used a scalloped frame die and on the inside panel I used the cool Gingham Stencil with Festive berries Distress oxide ink. I then flipped the stencil over and used Spun sugar Distress oxide ink. Placing the panel back inside the white frame gives a look of a typical picnic table cloth, don't you think? I flicked a couple of green Copics around the edge of the card base to make it look like the blanket is laid out on the grass. 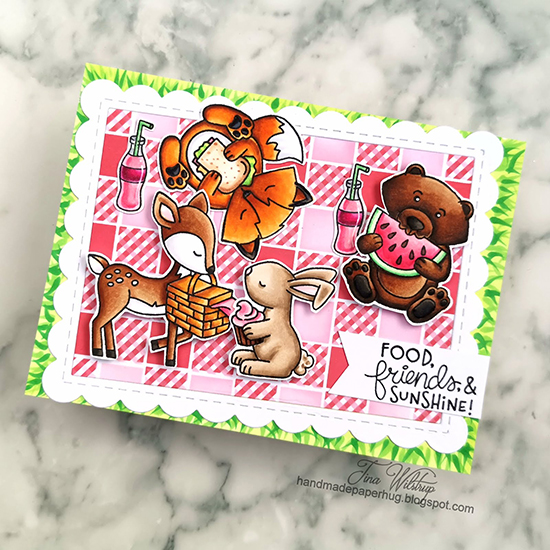 I popped up the critters with craft foam and placed them on the card. The little sneaky bunny is skipping main course and stealing desert from the basket, so cute! I stamped a sentiment on a strip of white cardstock and cut a flag at one end.

A huge thank you to team Newton's Nook for having me, I had so much fun playing with the cute stamps!

Have a great crafty day!

Are you ready to get your paws inky with our new products?

Winners from the blog hop are posted below - scroll down to see if you won.

Our new products are now available at newtonsnookdesigns.com 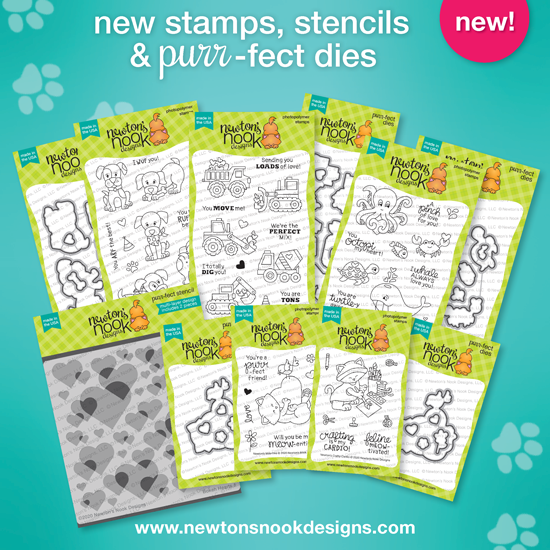 Thank you to everyone for participating in our blog hop. We really enjoy reading all of your comments! Check out below to see if you won! The blogs and the comments were chosen using random.org.

From Reveal Day 1 - Winner of the Tides of Love Stamp Set from the Tatiana's blog: Cindi Flass

Congrats to the Winners! Don't forget - you have 7 days from today to to e-mail us at info@newtonsnookdesigns.com with your full name and mailing address and the name of the set you won to claim your prize.

You can shop online now - our new release is up in the store! 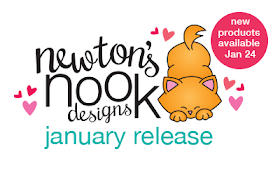 Today is our final reveal day for our January Release and we have two fun 3x4 sets featuring Newton! Scroll down for details! Plus, we are having a giveaway today too, so make sure you read all the way to the bottom of this post to see how to win! 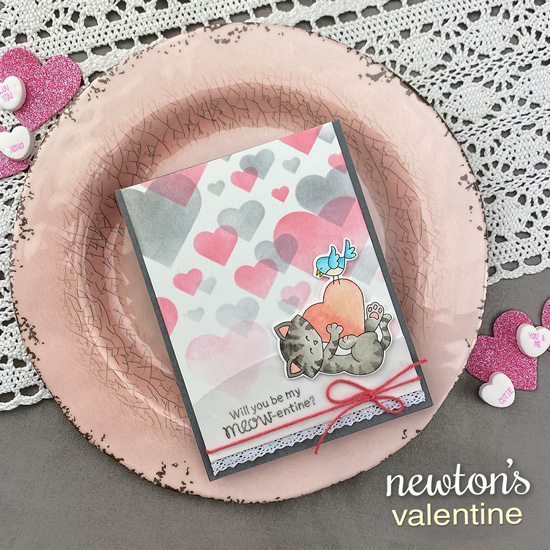 Newton is so adorable cuddled up to the heart on this sweet 3x4 stamp set! This set is just what you need for sending cards to those who warm your heart. For more versatility, use this set to send warm thoughts or encouragement and let someone know you care. 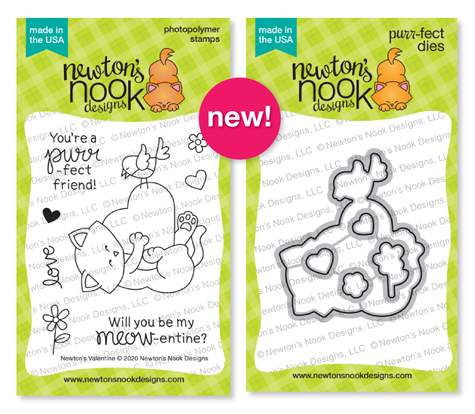 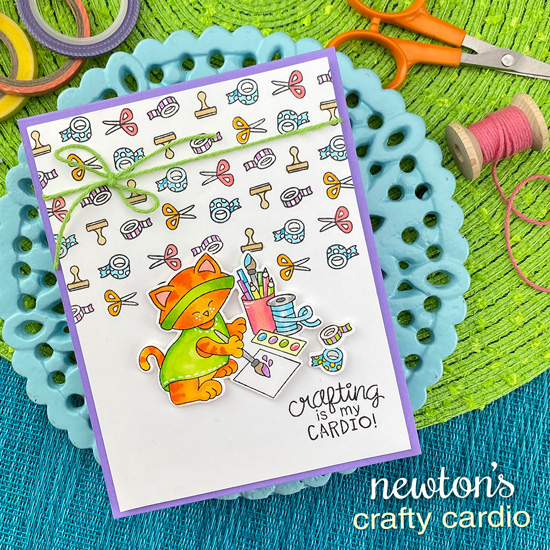 Crafting counts as a work-out, right? This amusing 3x4 stamp set features Newton "working out" his craft supplies! This humorous set is sure to tickle your funny bone. The theme is perfect for both crafty friends and cat lovers! The little added mini craft items and washi tape are perfect for creating perfect background patterns too. 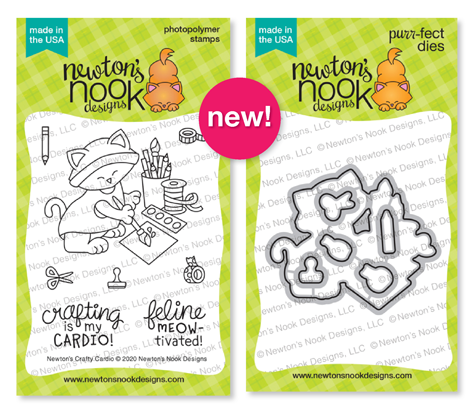 Check out all the awesome projects below from our Design Team below! Then, make sure to click through to all their blogs for details on their cards - you will find a few extra cards on some of the DT blogs and you might even find a fun video or two along the way! Make sure to comment on all the blogs for a chance to win! Details on the giveaway are at the bottom of today's post.

Would you like to win the “Newton's Crafty Cardio” or the "Newton's Valentine" Stamp Set?
We will choose ONE lucky winner for each stamp set!

Here's how to win: Comment on the NND blog and Design Team blogs (see list below)! The winner will be chosen at random from the collective reveal posts. Make sure to check out each of their blogs and comment for your chance to win. You will not know which blog has been chosen so the more you comment on the better your chances are of winning! You have until Thursday January 23rd at 9pm EST to comment  -- winners will be announced on the blog post on Friday, January 24th.